A Conversation in Little Rock

“When people wear shoes that don’t fit them, it says something about their soul. Generally, I think it means they are good people.” –Billy Bob Thornton, probably my favorite Arkansan

After leaving Hot Springs, TB and company cruised fifty miles to the northeast to Little Rock where we spent the 4th of July visiting the Bill Clinton Presidential Library and attending the city’s riverfront Independence Day festivities. Most of the day was unremarkable, which is not to say unenjoyable. I learned a few things at the museum, had an excellent burrito at the River Market and ooohhhed and ahhhhed at the fireworks after dark. However there were two vignettes unrelated to our visit that stood out as worthy of sharing on the blog.

The first was a lovers’ quarrel I couldn’t help noticing. It seems one of the unfortunate lovebirds was the victim of a “holding out” episode from the other. Determined to keep his personal property all to himself, the gentleman fled his lady in a backpedaling fashion, continually brushing her searching hands away from his person. For perhaps twenty yards the two became angrier with one another and their dialogue more regrettable and more audible to standers by. Finally penned against the chain link fence seen in the photo, the young gent appealed to the massed citizens within earshot to “SOMEBODY, PLEASE CALL THE PO-LICE.” At this point I could stand idly by no more. I quickly pulled out my phone in response to his plea. I was shaking, so it was difficult to manipulate the buttons. Fortunately I controlled my laughter and snapped this photo of our heroes. Note the dude’s blank stare in the foreground (you can tell even though you can’t see his face). Also note the sweet wife beater T. Keep an eye out for these two on a future episode of “Cops”……”but don’t arrest he’em aw-ficer…..I luvvvvvvvv himmmmmmm.” 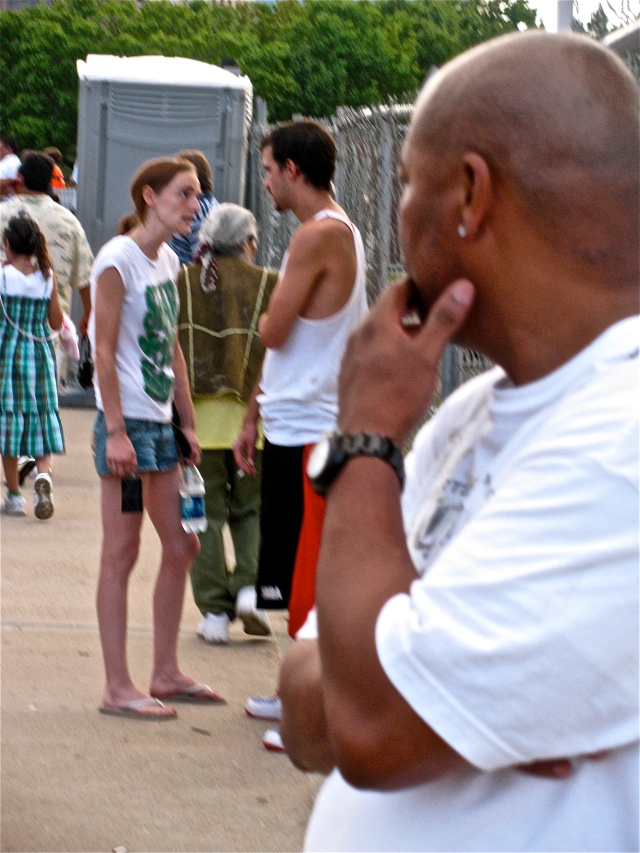 Also worth recording here was the substance of a conversation I overheard involving an old lady and her daughter at the festivities along the river leading up to the fireworks as grand finale scheduled for 9 pm. I judged the lady’s age at approximately 127 years old. Her Mother was probably 227. I should let you know there were preliminary bands and singers that started around 5 pm, and this conversation took place at about 6 pm. Anyway, here’s how it went:

Mamaw–When they gone play the symphony?

Daughter–It don’t start til after we leave.

Mamaw–It ain’t never been so late.

Daughter–Says here they come on last. Then they’s fireworks.

Mamaw–I been comin here for years, they ain’t never been this late.

Daughter–Shame we got to leave before they come on.

Daughter–I told you we was gone leave before the symphony.

Mamaw–Why’d we even come? I want to see the symphony. I don’t care ’bout these people and their singin.

Daughter–Cuz you said you wanted to see the symphony.

Mamaw–I don’t see why they playin so late. They ain’t never played so late.

Daughter–I could leave you here. But it would cost you to get home.

Mamaw–Fine, I wanna see the symphony.

Daughter–But it says here they don’t start til 8 30.

TB–(finishes making notes on iphone for blog, gets up and leaves seating area to search for star crossed lovers, staring blankly into the night, and humming softly, “won’t you come home Bill Bailey, won’t you come home?”; Later that night I looked up the song. First popularized in 1902.)

I'm a 40 year old lawyer living in Ridgeland, Mississippi. I'm several years and a couple hundred miles removed from most of my old running buddies so I started the blog to provide an outlet for many of the observations and ideas that used to be the subjects of our late night/happy hour/halftime conversations and arguments.
View all posts by travellinbaen →
This entry was posted in Blank Stares, Humor, Life and tagged Arkansas, Blank Stares, conversations, crackheads, funny, Humor, wife beater t-shirts. Bookmark the permalink.

11 Responses to A Conversation in Little Rock