Quote of the Day: “Don’t let it end like this. Tell them I said something.” –last words of Pancho Villa

TB’s bank here in Ridgeland was robbed Friday. They know who did it, sort of. It was this dude: 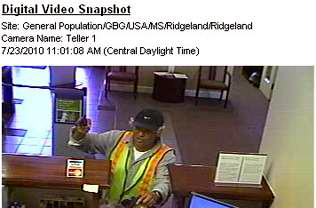 I wanted to call him Pancho Villa. Because the Federales let him get away. Out of kindness I suppose. But they will probably catch him any day. At least that’s what they say. I can see this man beneath that Brilliant Disguise:

But they’ll probably catch him. Bank robbers never seem to get very far. In which case, I’ll have to give him the moniker Sancho Panza. And anyway, while a vest would certainly be the sort of garment chosen by a modern-day Pancho Villa, going with the orange reflective variety is much more up Sancho’s alley. And while Pancho would definitely have been armed, the pea shooter in the photo is more likely a part of Sancho’s arsenal.

Really, this story should’ve blown up by now. A possible illegal immigrant trying to pass himself off as some kind of blond Aryan just robbed a bank at (heh, heh) gunpoint in a law-abiding, hard-working, upper middle class, mostly white suburb. Could somebody please get Beck on the phone? For me personally it would help. You see, God help me it must be something from a prior life, but I can’t help that I partly hope he gets away. And if Fox got on the story I’d feel less guilty about that. It’s not that I condone crime and I certainly condemn the use of a (heh, heh) gun in a crime. It’s just that it seems like such a grand, hopeless adventure, almost romantic in its desperation. And oh how I would have liked to have used  “desperado” in that last sentence. The other part of it is that I’ve grown so bitter about the true American/transnational corporate criminals who not only continue to terrorize our nation in a never-ending crime spree, but are actually rewarded annually with millions such that my small bank branch, to say nothing of our little desperado (I feel a little better now), can only dream about. So Sancho/Pancho, whoever you are, if you are in some little cafe searching the web for information about your heist, I leave you with two suggestions. One, if any of your confederates go by the nickname “Lefty”,  pay him off and be done with him. Then do your best to emulate this guy:

I'm a 40 year old lawyer living in Ridgeland, Mississippi. I'm several years and a couple hundred miles removed from most of my old running buddies so I started the blog to provide an outlet for many of the observations and ideas that used to be the subjects of our late night/happy hour/halftime conversations and arguments.
View all posts by travellinbaen →
This entry was posted in current events, Humor and tagged bank robbery, crime, current events, funny, Humor. Bookmark the permalink.